Browsing
On the search for a great value city car, with a good amount of trimmings? Then why not take a look at the Suzuki Celerio? It’s certainly not a name that will be on everyone’s lips, but Suzuki’s latest compact has a lot going for it. Let’s take a closer look.

OK, so the Suzuki Celerio is the most compact and cheapest car on the books of the Japanese manufacturer. But, it is far from the standard, ‘knock ‘em out quick’ city car that you would expect. Suzuki gives you one engine choice – a 1.0-litre petrol affair – that won’t excite speed fans. But, even the standard model comes with a broad range of luxuries that should be enough to catch the eye of the average motorist.

Truth be told, the new Suzuki isn’t a stunning sight, but it does have enough appeal to win over the average car driver. It’s a slightly boxy affair, but a low gradient on the bonnet gives it a sportier look. You’ll get alloy wheels with the standard model, too, which does raise the standards somewhat. No, it won’t win any awards for looks – but there’s more to it than just being a practical car. 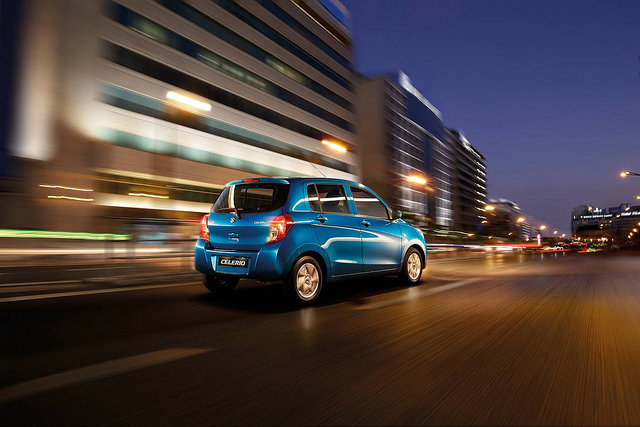 Behind the wheel feels a little average, but there are adjustable seats for positioning. And, we would have to say that the interior upholstery feels a little cheap. However, there is plenty of other features to enjoy. It’s the passenger and boot space where the new Suzuki excels. There’s plenty of room for two adults – and maybe three at a push – in the back. And, the boot is far more spacious than the vast majority of other cars in its class.

The good news for entertainment lovers is that all models come equipped with a DAB radio and CD player. Given that most manufacturers only have this as an upgrade, it’s a good move by Suzuki. That said, the in-car speakers are less than appealing – an upgrade here will be essential for audio lovers.

For a 1.0 litre engine, the new Suzuki is a surprisingly nippy little player. It only has a bhp of 67, but the body of the car is so light it’s more than enough to build up speed. Of course, you will struggle on a motorway to accelerate, but driving around town, it’s perfectly functional. And, indeed, we would say well above average for its size. For a compact car, the suspension is comfortable – way more than equivalent models from Honda and Skoda, for example. And, while there are a few issues with the steering, the Celerio handles well around corners.

The Suzuki Celerio hatchback is one of the most reliable compacts out there right now. And, given its also one of the cheapest – to buy and run – it offers excellent value. Throw in a few fresh accessories and the vast majority of city motorists will have plenty to enjoy. Looking for a new car? The new Suzuki is available now from around £6,999. You can also expect a three-year or 60,000-mile warranty within the price.

Whoa check out this cool Predator motorbike based on the movie. This Predator Motorbike was created by Pitstop Motors of New Jersey. This cool bike it is not just for show but is a fully functional 2007 Suzuki Hayabusa with a monstrous engine and runs like anything on road but with increased intensity and presence as can easily be seen with the variety of images from Miggiddymatt, iO9, SSBMag and theOOrig.